Warning: sizeof(): Parameter must be an array or an object that implements Countable in /usr/home/msampogna/public_html/howtostartafire.canopybrandgroup.com/wp-content/plugins/wordpress-firewall-2/wordpress-firewall-2.php on line 300
 sewers | How to Start a Fire

And neither was NYC. The subway alone was built in many days, most of them taking place over ninety years ago.

Let that sink in for a moment.

In fact, most of the city’s infrastructure is at least 50 years old, according to the latest report from the Center For an Urban Future, which has the troubling title of Caution Ahead. Some highlights are century-old water mains which lose about a quarter of their capacity to leaks, the 84 year old sewers, the sexagenarian homeless shelters and schools, and the 60% of cargo facilities at JFK that are unfit for modern screening, storage, distribution. Troubling news, to say the least, especially for those who depend on those systems of infrastructure every day. 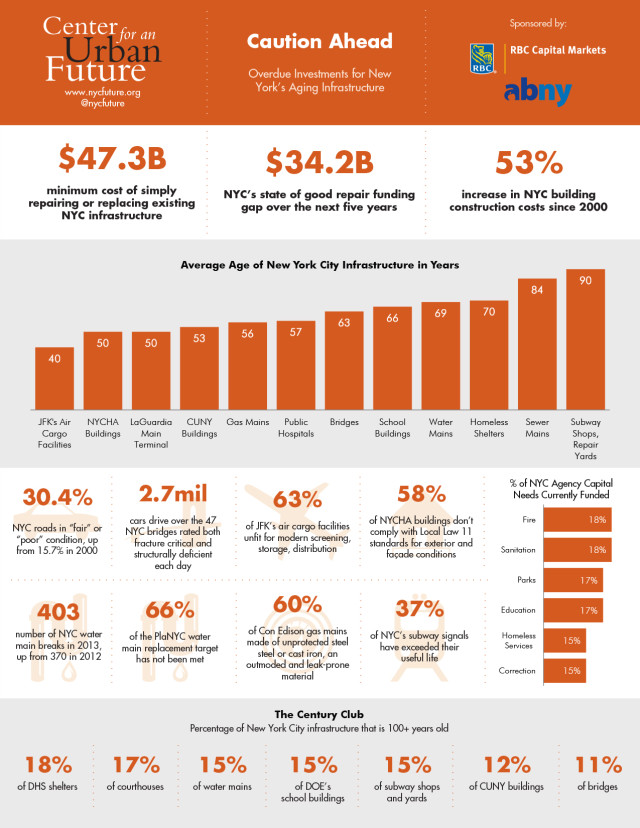 This is not surprising for an old city such as New York. However, according to the creator of the study, there is no reason for panic. Rather, Adam Forman said the major concern right now is bringing maintenance to the forefront of the city budget: “It’s time to refocus our capital programs and bringing things into a state of good repair, not just building new things.”

What’s important to remember is while the urban decay is troubling, there is no reason to worry as of yet. Many of these infrastructures remain serviceable and in working order, so there’s no need to find a new way to get to work in the morning. Rather, the report is meant to spur action on the part of the city and investors, to focus on the future of the city.

What Sparks Our Fire: Our city is old, and full of stories. We should maintain it so that we can keep making new ones.

Do you see signs of urban decay in NYC?